In this High Holiday Season, so full of self-created gratification, we should never forget that hidden in the shadow of all passing pleasures dwells their unseen opposite, some form of sorrow that -- sooner or later -- must visit the unwary soul. Yet... for our striving to remember this inescapable fact of life, born in us is this bright new understanding: lasting joy is found only in the realization of our True Self.

The small handsome sign over the new shop in town was simple. Its hand-carved wood-block letters read: Rare Wine Shop. Hanging directly beneath it was a smaller, arrow-shaped sign, pointing directly to the always-open shop door. Brightly painted letters spelled out the invitation:

And inside the shop the lights were always on, so that no one passing by might mistake it for being closed.

One day a young man walked into the store and, after politely greeting the elderly shop owner, asked if he might taste a few of the wines for sale. To his surprise, the owner told him that the store only sold one wine -- a rare wine, but of this the shopkeeper would gladly pour him a glass to sample.

Finding it difficult to keep his thoughts to himself in the awkward moments of waiting for the owner to pour the wine, the young man decided to speak his mind: "Isn't it awfully difficult to stay in business selling only one kind wine?"

He didn't know what to make of the shop-owner's reply, even though it was given with a smile. "I guess it all depends on the nature of one's business". With this he was handed a taster's glass of a dark-red, richly fragrant wine. The owner kept speaking.

"This wine is not to everyone's taste", but there was no apology in his tone. "However", his tone shifting as though trying to convey some unspoken secret, "there are those who, having once tasted this wine, can never again be satisfied again with any other."

"We'll have to see," said the young man, while lifting the small amber glass to his lips, "That would have to be some special wine". Then, doing his best to look cultured enough to know the difference, he sniffed the wine, whirled it around a time or two, and took a deliberately slow, measured sip.

The trembling began in his mouth... almost a quiver... and it spread to a delicious, almost familiar warmth, washing over and within him, like being immersed in liquid sunlight. He forgot that he was standing there -- even that there was wine in his mouth. So captured by a surge of sensations was he, and equally unable to resist them, that his principle awareness was on how much he hoped the wine shop owner couldn't see what he was going through. Mercifully, he noticed that the elder had turned his back on him to return the wine bottle back to the shelf. Quickly he set his sample glass back down on the counter, and composing the most sincere smile he could to cover his strange reaction to the wine, he thanked the shop owner for his hospitality and walked sharply out the door.

That same evening the young man attended a party given by his closest friends, in honor of himself, to celebrate recent good fortune that had come his way. But the afternoon's wine-tasting event was still with him. He felt removed -- almost a stranger amongst his own. And even more peculiar was how the wine served that night, which had always been his favorite, tasted so old and lifeless. He drank it nevertheless... glass after glass of it. However it wasn't for the pleasure of the wine, or to better mingle with his admiring company; he drank to make the night pass quickly, to make his heart forget the way it had been stirred only hours earlier in an obscure wine shop no one else knew even existed. Only the more he drank, the more it made him remember.

The next morning, awakening from a fitful sleep, he wasn't at all sure how he got home and into bed. However, there was one thing he was sure about. He wanted, above all else, to put the strange events of the day just past behind him. But this wish wasn't to be.

All he could think about at work, all day long, was that most unusual wine he'd sipped the day before. Finally, in a cross between fearing he might be losing his mind, and realizing he was unable to do any real work the way he was, he closed his business for the day and headed straight for the one-wine Rare Wine Shop.

On the way there his own thoughts tormented him with mental pictures that the specialty shop would be closed, or worse, perhaps gone out of business. The nearer he drew to the store's location, the greater grew his fear. After all, what would happen to him if he were unable to satisfy this new love of his for the rare wine? So, when the troubled young man arrived at the shop door he was heartened to see it open. He walked inside, drawing a deep breath as though trying to drink in the whole aromatic atmosphere at once. The old shop owner looked him over closely, but remained silent. Neither of them spoke, yet much was exchanged in those few first moments. Then, the young man sensing clearly there was no sense in pretending anything began pleading with the shop owner.

"Please!" he implored, looking down at the rough wood-planked floor. "You must tell me what's going on here! In less than twenty-four hours since I came here and tasted your wine, I feel as though everything I've ever cared about is as nothing. What's happening to me? All I can think about... " (and he struggled not to say what he knew he was about to hear himself say) "... is this... wine!"

His eyes looked up to meet those of the old man's, and in that instant of contact he felt like a small child being evaluated... for something beyond his reasoning... by a caring, but obviously detached adult. But, what shocked him most was that, clearly, this wine shop owner wasn't the least bit surprised, at either his pleading questions or his shaky behavior. And that's when the young man realized he'd asked the old man the wrong question. It shouldn't have been, "What have you done to me?" No! Now he could see that he should have asked, "Who are you?" And as if to finally confound him all the more, the very next moment he was listening to the answer of this, his unspoken question.

"Many, many long years ago, in the far country of my homeland, there came a Great War. Nothing like it had ever occurred before... nor after"... he added as a kind of after-thought. "Because of the great dangers threatening to overshadow his realm, our great King -- long may he reign -- decided that the wisest way to protect the scores upon scores of his noble citizens was to send them away to live in certain far points of the nation. There, it was reasoned, they would be safe, be able to thrive, and remain well until the uprising and conflict had passed. Then all could return home." He paused again, thinking over what he'd just said. Deciding he had the facts straight he confirmed, "At least, as I understand it, this was to be the plan."

The elder paused to pour himself a glass of wine and, by nodding toward a second glass sitting on the counter, asked if his visitor would enjoy some too. "Please", the young man answered using an enthusiastic nod of his own.

"Anyway," the shopkeeper continued as he poured, "for so long did so many of these men and women live in these distant parts of the realm that they, and their children, and their children's children, came to forget all about the country of their origin... and, of course, their great king. And that's why I am here in your city. I've been sent to search out these lost citizens and, if they wish, to bring them back to the highlands of their rightful homeland." He lifted up his glass of wine in salute, and the young man did likewise, although unsure of just exactly what it was that was being toasted. They both took a full swallow of the wine, savoring both the warmth of it and the moment of their obviously shared enjoyment. The moment lingered. But, at least for one of them, there remained unanswered questions, so the moment wasn't enough.

"Sir, it goes without saying that I'm sorry to hear of anyone losing his or her way in this world, but what does your story have to do with this strange effect which your wine has upon me?" He was already beginning to feel the delicious effects of the mouthful he'd swallowed only seconds before, so he wasn't sure if the shopkeeper had only just become more serious, or if he'd always spoken in that tone now being directed toward him.

"The one wine I sell in my shop is made from certain rare grapes and unique spices growing only in the rich, fertile highland valleys of my beloved country. And while it's true that I do go looking all over the world for those good citizens whose true heritage is our Highlands," and again he raised his glass in a silent toast, "it is this wine that does the finding" ... for any man or woman, regardless of how long separated from our beloved kingdom, knows its flavor. In fact, it's my experience that entire generations may have passed, and their children may have never before tasted this wine in their lifetime, still ... all it takes is one small sip and they make themselves known to me... just as you have."

He paused just long enough to insure the young man had time to grasp the full meaning of his words. "You see this wine has the power to stir and to awaken in our people a certain long-slumbering memory. It causes them to recall the place of their True Origin. And, once having been awakened this way, nothing else really matters to them, other than making their way back to their Highland Home." And he smiled at his equally beaming visitor, "Yes... all it takes is just one taste."

Again the young man nodded in agreement, only this time, he knew why.

Excerpted From: Seeker's Guide to Self-Freedom: Truths for Living, Introduction 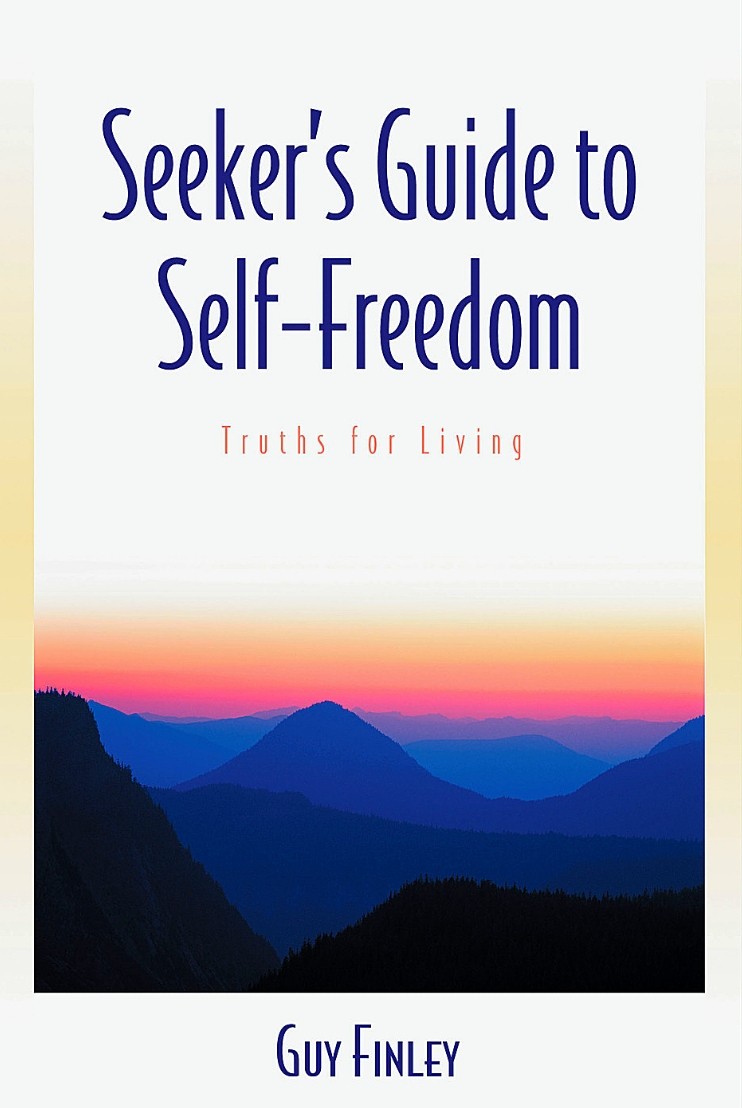