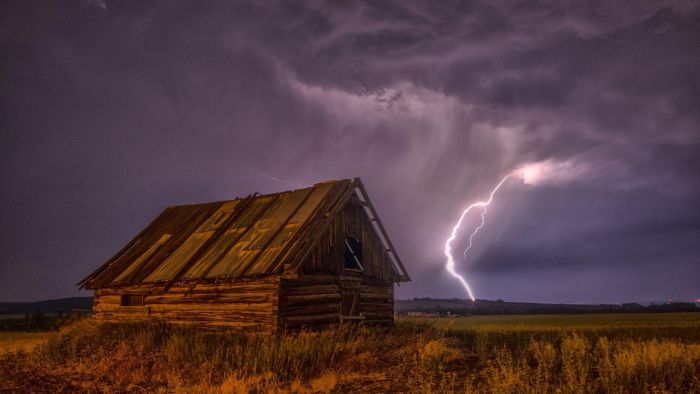 Go from Storms to Sunny Skies

Just as it's true of all tempests in nature, psychological storms must pass too; but those who run from their troubles run with them, which is why -- wherever they go -- a storm awaits their arrival.

Doesn't it feel at times as though we are all shipwrecked on an island of confusion and stormy emotions? And that over time we've all but forgotten it's possible to live any other way? Where our days are spent either hiding from the storms, or building inadequate shelters to protect ourselves while doing nothing real to get rescued? Yet, something in us knows that there will never be an end to battling storms on an island that sits directly in the surge of their path.

There are higher parts of us that sense there is something outside of the storm. It is that right part that knows our only hope is to be rescued, and that it is our responsibility to invite rescue by sending out a signal. Fighting the storm by resisting its winds and rain will do no good. Truth tells us, "Resist not evil." Instead of battling life's storms, place your attention and efforts where they can work for your true best interests. Seek the rescue of True Understanding.

If you've been studying truthful principles for some time, you may be familiar with that betraying inner voice that tells you if there were an answer, you would have found it long ago. Don't listen to that voice! It's the voice of your false nature, desperate for the continuation of itself. There is only one thing that is important, and that is to be rescued. No matter how long it takes, once that rescuing understanding comes to you, the time it took to arrive will be immaterial. The only important fact will be that you will know you are going home.

Let's see what all this means with a practical example. Perhaps a man is worried about the future. He believes that in order to feel secure, he must acquire a certain amount of money. Any time he feels thwarted in his efforts to achieve his aim, he finds himself in a storm of anger and despair. But he has been working with these ideas, so he decides to do something different about his pain. When the worry thoughts come, instead of coming up with some new scheme to protect himself, or ranting against an unfair world, he decides to admit that he doesn't know what to do, and instead, to light a signal fire. That is, he asks for Higher help. As that light shines on the storm, he begins to realize that he had been putting himself through unnecessary torment. He sees that his fear made demands that practicality did not require. He sees that his desperation made him do foolish things with his money, but that more intelligent decisions were possible. By having the courage to see that everything he believed about himself was mistaken, a new, higher view is possible for him.

Stop fighting the storm. Instead, seek to understand it. When you begin to doubt everything you believe about your suffering, you will see that you never had to remain in the path of those destructive storms at all.

Excerpted From: The Intimate Enemy: Winning the War Within Yourself pages 27-31.